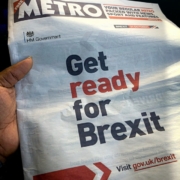 The timing of the Brexit deal was designed to allow minimum scrutiny and maximum gasps of relief.

By waiting until Christmas Eve to sign off a deal that could – and should – have been completed months ago, Boris Johnson has set an oven-ready trap for Labour. No-one should be fooled by this smoke and mirrors trick.

The false dichotomy between Boris’s shoddy deal and the chaos of no deal is one that Labour should reject.

The vote in the Commons is not a meaningful vote, but even if it was it is up to the Government to ensure a majority for it.

Labour is suffering from ‘Stockholm Syndrome’. Held hostage by Johnson’s fibs, fabrications and ‘cunning plans’, they are in danger of mistaking release for the end in itself.

The Conservative Party needs to be forced to take exclusive ownership of a policy that will bedevil and blight British politics, economy and society for years to come.

It may trigger the death of the United Kingdom. In economic terms this deal ties Northern Ireland closer to the Republic and the EU.

If and when a referendum is held on the future of the territory, no-one should be surprised to see it held up as a reason to leave the UK.

As this deal is analysed and implemented, its damaging nature will be exposed coming more and more to the fore.

When our manufacturing sector becomes less competitive than EU competitors because of its exclusion from the customs union, when Britain’s car industry collapses as the agreed new ‘rules of origin ‘requirements triggers tariffs, when our service sector declines relative to the EU because of the lack of market access and when inward investment shrinks, Labour needs to be able to pin the tail on the Tory donkey where the blame belongs.

If Labour votes for this desperate deal, the Conservatives will have an easy refrain – ‘you voted for it’.

When it becomes clear this deal makes our labour and environmental standards vulnerable, weakens our universities and does not deliver on the promises made to fishing and farming communities, Labour will be viewed as culpable as the real guilty party.

As we serially expose the impact of the deal on various sectors of society, we will be asked ‘if it is so bad, why did you vote for it?’. Or do we collude in pandering to the pandemic as promoter?

We understand that Labour wants to look responsible and constructive by voting for this deal. Yet we will in fact look weak and malleable.

Voting for, will give the Prime Minister a massive majority and appear to endorse his negotiating strategy. Voting against, enables Labour to make clear that it will in power seek to improve and rebalance our relationship with the EU.

A no vote does not imply rejection of the 2016 referendum, but it allows us to make clear that our vision of a future relationship with Europe is quite different from this thinnest of deals the Government has manoeuvred.

There is a mountain of quotes from leading Brexiteers claiming they envisaged a relationship a million miles from this one.

The hope of Labour’s leadership in recommending a positive vote on this deal appears to be to draw a line under Brexit and appeal to the so called ‘red wall voters’.

Yet the evidence is many of them regret their vote and feel conned by the false promises of the Brexiteers. It is unlikely that voting for the deal will bring them back to Labour.

However, voting for it will be another nail in Labour’s coffin in Scotland and most commentators say Labour cannot win a general election without some recovery in Scotland.

The SNP narrative of betrayal is well under way. They have already claimed the deal will cost Scotland £9 billion, sells out our fishing community and hammers our, previously unheralded, potato seed farmers.

The Nationalists will vote against the deal and accuse Labour of siding with the Conservatives against Scotland’s interest.

A Labour defence that, to avoid a no-deal shambles, there was no alternative will be met with the strident response that there is an alternative and it is for Scotland to have its own relationship with Brussels as an independent country.

It’s time someone said it – ‘the Emperor has no clothes’.

For reasons of principle, policy, and politics we urge Labour to reject this damaging deal.