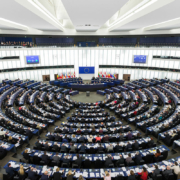 One of the Tory/BREXIT canards about the European Union (EU) were claims to its undemocratic nature. There was a ‘democratic deficit’, but Brussels was far less overdrawn in that account than claimed. It was all a bit rich coming from a country, whose own political architecture, with its patronage House of Lords chamber, would fail to meet the EU’s more stringent post Soviet Empire criteria for membership, and one that frustrated, when not sabotaging attempts to address the shortfall.

Each successive EU Treaty shrank the credibility gap – the Single European Act, Maastricht, Amsterdam, Nice and Lisbon – by augmenting the power of the European Parliament (EP). It was Lisbon, the last, ratified in 2010, whose unintended consequences provided the EU’s modern suffragettes the institutional framework to subvert the rule of the European Council’s oligarchs. Now the Commission President was to be rubber stamped by the EP. For the Socialists, if confirmation of President was to be the domain of the EP, why stop here? Why not select as well as elect, commandeer and pre-empt the candidate selection with personality welded to political platform for 2014? The Party of European Socialists (PES) led the way and a hesitant European People’s Party (EPP) followed.

The PES selected Martin Schulz and the EPP Jean Claude Juncker. Shultz was the unanimous choice. The EPP, in contrast, at their Dublin Congress, with delegates representing 73 parties from 39 countries, elected Jean Claude Juncker over Michel Barnier 382-245. Dublin looked like a dog, barked like a dog and answered to the name of ‘fido’. It was a Presidential Convention in all but name. The candidates covered the continent with rallies, TV debates and mass campaigns.

Schulz and Juncker did the deal, agreeing to rally around the candidate with most MEPs in the ‘de facto’ EP electoral college. The outcome was 221 v 191 to the EPP. Despite Merkel’s antipathy and Cameron and Orbán’s opposition, Juncker was nominated and elected by 422 to 250. For two and a half years with Schulz as EP President and Juncker in the Berlaymont (the European Commission HQ in Brussels) it was virtually a diarchy as the two phoned each other a dozen times a day.

In the run-up to the 2019 Elections, the EPP select Manfred Weber at their Helsinki Congress while the PES chose Dutch Socialist, Frans Timmermans, in Madrid. This time there was no deal. Both main parties suffered to the benefit of the Liberals and Greens with the EPP widening the gap over the PES to 182-154, but with an overall clear centre/centre-left win at the expense of the right.

Merkel stabbed Timmermans in the front and Weber in the back in her distaste for the system. Despite Timmermans guaranteed win in the Council, she proposed a favourite daughter in Ursula von der Leyen, who in the EP only scraped over the 374 threshold by 9 votes (out of 747). Merkel’s manipulation had been a dangerous gamble. For in the struggle between democrats and oligarchs the EP has a secret weapon, Rule 124(4), ‘If the candidate does not obtain the required majority, the President shall invite the European Council to propose a new candidate within one month for election in accordance with the same procedure’. The process recycles endlessly. Any Council decision to overrule the EP risks triggering a Constitutional crisis.

Once one candidate is rejected, the chances of each subsequent candidate decline. If the EP holds its nerve there can only be one winner.

The run up to 2024 may, in consequence, see Europe’s political families choose to drive rather than subvert the process. Labour in the PES needs to promote vision not division. After all, there is a limit to how many times you can play ‘double or quits’ and expect to win.